Metropolitan Geevarghese Mor Coorilos is a bishop of the Diocese of Niranam of the Syrian Orthodox Church in Kerala, Southern India. He spoke about the religious field and situation of churches especially in India in a Seminar that was held in the Cultural Centre Sofia, Helsinki, on Monday 15th of September 2014.

History of the Orthodox Church in India

The Orthodoxy in India has a heritage that is seen to be as old as the Christianity itself. Today the churches in India face many challenges both internal and external. India is a melting pot for cultures and religions and it has been affected both imperialistic views and religious renewals. Country that has been independent only since 1947 is today the second most populous country in the world, with 1.2 billion people. Even if all the Christian denominations are counted together they form only 2.5% of the total population.

Orthodox tradition has been born inside India. It is said that Orthodoxy was brought to the land by St. Thomas, disciple of Jesus Christ and a humble fisherman. This view has been tested and challenged by the academics and thinkers, but certain is that the first Christian influences arrived to the country in the very first centuries AD. Because of this origin the Orthodox tradition in India is Syrian and it is part of the Oriental Orthodox Churches. But what is the situation in India today? About this very complex and difficult subject Metropolitan Mor Coorilos spoke on Monday. He belongs to the Syrian-Orthodox church, which is the biggest Orthodox denomination in India with 31 dioceses, 33 bishops and about 3.5 million families, medium family size being 5–7 people. In his own diocese there are 15 parishes and about 850&nbsp 000 families.

“To understand India, you have to understand the Casteism, the Caste System,” told Metropolitan Mor Coorilos in the beginning of his very eye-opening lecture. The term means the ideological way in Hinduism that separates people to different classes. There are four castes in the hierarchical system: Brahmins, the priests and the highest caste Kshatriyas, the warrior caste Vaishyas, traditionally traders and merchants and as the lowest of the four Shudras, the servants and slaves. There are however people who do not fit even the lowest caste, the Dalits.

The Dalits or “Untouchables” are in fact today the most numerous group in India. Throughout history they have been considered less than humans and violently persecuted. Nowadays there are few persons who have created their fortunes and risen from the Dalits to be successful, but even they are still treated as outsiders and continue to be persecuted.

Even though the Caste System is now considered illegal by the country’s own constitution (and it has been for several decades), the Castes are embedded very deep to the culture, the daily life, the people’s minds and in Hinduism. As Metropolitan Mor Coorilos stated, to oppose the Caste based society is to oppose Hinduism. If you don’t believe in the system, you are not Hindu.

How can Christians live in a society where the status of a person is set from the birth and is seen as something that is not possible to change during lifetime? As a minority in a country where majority of the people are Hindu and where attitudes against other religions have increasingly hardened and even come hostile, the Orthodox Church has created itself a place among the people and the system. Metropolitan Mor Coorilos named this place to be a Myth. According to the myth, when St. Thomas arrived to India, he chose to convert only from the upper class. This would mean that all the Orthodox Christians in India are the descendants from the upper class, the Brahmins. This creates kind of balance, that has offered a chance to co-exist mainly peacefully next to the Hindu Caste system.

Unfortunately, this has also had an exclusive effect on the church. It is the main reason why the church has not been active on the Missionary field, because that would mean opening the door for the Dalits and an indigenous people called Adivasi, who are together considered the lowest group of people in India. This is a situation that Metropolitan Mor Coorilos is actively trying to change. Going with the current and closing eyes about the dire social justice issues, even if it means a bit more peaceful co-existence, also means forgetting the most important aspects of Christianity itself.

However, there are also a few bishops and clergy who see renewal as the only right path for the church. Metropolitan Mor Coorilos has started new mission activities (www.stpaulsmission.org) evangelizing the Dalits and Adevasi. Today, there are almost 15&nbsp 000 converts among them to Orthodoxy.

Many consider Metropolitan Mor Coorilos to be very unorthodox in his activities. His Eminence is convinced that if the Christian churches would have been more active in their mission to help the downcast and persecuted, India would be greatly more Christian society today. Although the attitudes are changing, the pace is slow and the road to a permanent change has been made very difficult also by the political and cultural atmosphere in India.

India´s new Prime Minister is a Hindu and known for his very strict and even hostile attitude against Dalits and other religions. The state in the North that he previously governed is the place for few of the most violent attacks and persecution against casteless, Christians and Muslims.

In his lecture Metropolitan Mor Coorilos brought up the fact that usually it still is the Dalits Christians or Dalit Muslims who are persecuted. The poorest and weakest of society are persecuted daily by the extremists. Even though the Constitution of India states that every person has the right to choose, practice and change their religion, among the Hinduism Mission is looked very harshly. The main reason being that they do not do it, so no one else should not either.

The conflicts between fundamental Hindus and other religions are worst in the Northern part of India where in some states Missionary work has been criminalized by legislation. In the South, which is traditionally the most Christian area, situation is a bit better. However the future is uncertain and Metropolitan Mor Coorilos believes there are still harder times to come.

But even in the time of persecution and hostilities there is a silvery border on the dark cloud. There are constant efforts to end the division between the two Orthodox Churches, the darkness of persecution is bringing Christians of all denominations closer together and breaking the caste-mindedness inside the Churches.

Metropolitan Mor Coorilos’ opinion is clear. The Church’s task is to bring people to the Church through active mission to encounter “personal Jesus Christ, who doesn’t accept any kind of discrimination.” This is the way for the Christians in India to follow and the reason he continues speak out for the social unjustices in his home country. “Christ who is not worth sharing, is Christ not worth believing in. If we believe He is special, we need to share Him with others.” 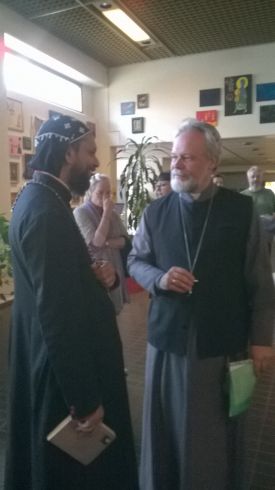