By Phoebe Farag Mikhail
For three years, my summer ritual included some time in a remote village in southern Egypt, running a girls’ empowerment program. Each visit would include a pilgrimage to a sacred place near this village: an ancient Roman ruin of the city of Antinoupolis, now called Ansena, dating back to the first century (For more information). It was one of Egypt’s best kept tourism secrets—too far from other well known tourist areas, and not fully excavated by academics and archeologists. So it maintained its hallowed nature.

I remember walking around it, the early evening wind whipping across my face as I looked at the remains of homes and churches, marveled at the Coptic, Greek, and Syriac inscriptions, and handled broken pieces of pottery that might have been used thousands of years ago. It was the site of a massacre of Coptic Christians under the Roman Empire, when the blood that flowed in the streets was said to have “reached the knees of horses.” I was told by the priest with me during one visit, that a bishop who went to visit took his shoes off upon arrival, the ground being made holy by the blood of the martyrs.

This ruin was a symbol of Egypt’s beauty to me. Much of Egypt’s tourism is built around ruins – ruined temples and ruined graves that have lasted over millennia. To an outside observer unaware of its history and significance, Ansena was simply a deserted, run down place cordoned off by a few bits of rope to separate it from the rest of the surrounding area. But to me, and to the few others who knew about it, it held treasures—spiritual, historical, archeological, and more.

Unfortunately, the wrong people knew that there was something of value in that site. I did not imagine how painful it would feel when I found out that it was being systematically destroyed and looted for months as nearby residents wanted to reclaim it for agricultural land. Most recently, during a security vacuum in the southern parts of Egypt after the events of July 3rd, 2013, when the Muslim Brotherhood-led government was overthrown by popular demand, Ansena was bombed by dynamite in September (The news report). This happened soon after over one hundred Christian churches and institutions in Egypt were burned and looted over two or three days by mobs of Islamist Morsy supporters who scapegoated the Copts for Morsy’s demise (List of reported incidents). As with the church burnings, few official investigations have ensued, and so we can only assume that this crime has been committed by both angry Islamists and local opportunists interested in making money off of these precious antiquities at a time when area security was weak.

In place of these destroyed ruins in Ansena, we now have new ruins all over Egypt. A photograph has been shared all over social media of a couple who decided to hold their engagement ceremony in one of the churches that was burned and looted (The photo). The church, like Ansena, was a witness to persecution, and though its walls and icons were blackened and charred, they were somehow full of riches – just like the Ansena ruin. The holiness of the place emanated from the photograph, not through the lights of crystal chandaliers reflecting off of gold-flecked icons, but through the faces of people in awe of being found worthy to suffer for the sake of Christ.

How is it that a burned church building would cause the believers within it to suffer for the sake of Christ? For starters, the churches attacked are not in Cairo, where most of Egypt’s wealth resides, but in southern Egypt (known as Upper Egypt), where much of Egypt’s poor live. These churches have been built and maintained by the people of these communities, giving their tithes by the piaster and/or their volunteer labor. Destroying those churches is tantamount to destroying their homes.

Churches serve not just as houses of worship, but as community spaces in a country where civic spaces otherwise don’t exist. Egypt does not have a public library system or public services for the elderly, and the absence of government sponsored social services (as well as government mistrust and harassment of non-governmental organizations) in general have left that space open for mosques and churches to fill (Analysis at this point). With very little outside of the church at their disposal, Coptic Christians not only worship in their churches, they meet there, receive much needed community service there, hold boy and girl scout clubs there, organize soccer matches and meetings for men, women, youth, and children there. Many larger churches run preschools, elderly care homes, health clinics, and summer camps. In a country where Copts are continually facing discrimination and outright persecution, their churches have become their refuge, sometimes to the point of willful self-isolation. Destroying these churches means destroying the fabric of Coptic daily life.

Of late, churches have also not just become a social refuge for Copts, but physical ones. When Coptic homes and businesses were attacked in Luxor soon after the June 30th demonstrations, (Report from Amnesty International) the newly homeless found shelter in their church. In the towns where Islamist retaliation has included Christian churches, homes, and businesses, these Copts have literally nowhere to go.

Churches need permits to rebuild, a process that can take months, even years, and one that the Egyptian Ministry of the Interior, ironically, often blocks for “security” reasons. In November 2010, riot police even stormed a Coptic church in Omraneya, Giza, for making repairs without a “license” (Article of Kathryn Cameron Porter). Sectarian conflicts all over Egypt usually start with a church repair that gets protested by Salafis or other Islamists and end in “reconciliation sessions” where the church basically agrees not to do the repair, or to remove a visible cross from the building. Burning or attacking a church guarantees more sectarian conflict, and even conflict with the state, when it gets rebuilt.

In these ways, all the communities whose churches have been burned have suffered, and continue to suffer, for the sake of Christ. They have lost their home, their center, their refuge, their effort, their money, and their time. The Islamists, the mobs, the thugs, and the opportunists that wreaked all this destruction may have thought that by incurring these losses, they would be dissipating the Coptic community. They have only served, however, to strengthen the Copts and their faith in their Savior Jesus Christ. All they needed to do is go back to Ansena, a monument, even after its destruction, of the Egyptian Christian martyrdom that only served to strengthen the community and spread the faith all over Egypt. All they needed to know was that Christianity is not a faith of death but a faith of Resurrection, and anything that suffers death in Christ will rise again in Christ.

I live in the U.S., far from these events, but close in spirit. I’ve learned from the perseverance of the Copts in Egypt, and pray for them daily that they would stay strong in their faith. And I pray that I would also be strong in the faith, this faith that looks at a burnt and looted building and says, “This is beautiful. Our Lord Jesus Christ is here.” 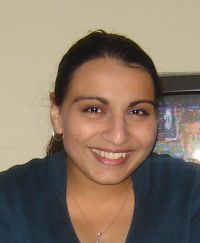 Phoebe Farag Mikhail is a member of the Coptic Orthodox Church, an educator, writer and activist who blogs at Listen, Learn, Act and Reflect. She has worked in community development in Egypt for many years and continues to advocate for a better Egypt for all Egyptians.